I am a (co-)PI of the following projects: BEF-Loops, GrazeLife, and the beta diversity experiment. Furthermore, I am also involved in various other projects.

A major question in the field of ecology is how plant species richness is related to grassland biomass production. Ecologists have studied this question from two perspectives, namely the perspective in which biomass production drives variation in plant species richness (Productivity Richness Relationships or PRR), and the perspective where a reverse causality is assumed, and plant richness drives variation in plant productivity (Biodiversity and Ecosystem Functioning or BEF perspective). While PRR and BEF mechanisms may jointly operate and are inherently related, they are typically studied in separation by different researchers representing different schools of thought. However, PRR relationships cannot be fully understood without accounting for BEF relationships, and vice versa, thus limiting our understanding of how both both plant diversity and biomass production are driven in grasslands.

The aim of the DFG-funded BEF-Loops project (part of the Biodiversity Exploratories) is to compare the relative strength of BEF and PRR relationships in driving overall relationships between plant diversity and biomass production in agricultural grasslands. This work is done by PhD student Karl Andraczek, under my supervision. We combine experiments and comparative observations along a land use intensity gradient in Germany. In the experiments, factors related to standing biomass removal (grazing and mowing), biomass production (fertilization) as well as plant diversity are manipulated within the same fields, and the relative strength of the effects of these manipulations is assessed. Within the same fields, data from unmanipulated grasslands will be collected and analysed using structural equation models in order to investigate the direct and indirect relationships between standing biomass, plant productivity and plant species richness, as well as covarying factors (e.g. soil fertility, light interception, grassland management).

In the European Union, two major developments are strongly driving land use change. On the one hand, land use is being intensified in various regions in Europe, while on the other hand, land abandonment is a common phenomenon in many parts of Europe where agriculture is no longer economically attractive. There are concerns that both these processes may be harmful for biodiversity and the provisioning of various ecosystem services.

With Grazelife, we aim to assess which forms of grazing models (e.g. intensive livestock grazing, extensive livestock grazing, pastoralism, uncoordinated land abandonment and rewilding) are best for both biodiversity conservation and the provisioning of several ecosystem services, including wildfire mitigation, soil carbon storage and cultural ecosystem services. In addition, we investigate to which extent these competing forms of land use (and thereby their associated levels of biodiversity and ecosystem services) are supported or hampered by the Common Agricultural Policy, and to which extent this drives how land users are managing their land. This work is done using a combination of literature reviews and stakeholder interviews. PhD student Julia Rouet-Leduc is leading most of this work, under supervision of Guy Pe’er and myself.

Based on biodiversity experiments, it is well established that random species loss can impair the ability of ecosystems to provide various ecosystem functions, including biomass production. What is less well understood, is whether these relationships also hold at larger scales, and how they depend on factors such as abiotic heterogeneity and dispersal. With the beta diversity experiment, which was set up together with Alexandra Weigelt and Christian Wirth, we aim to bridge the gap between small scale biodievrsity experiments and larger scale biodiversity loss, by investigating how beta diversity, i.e. the spatial turnover in the composition of plant communities, drives biomass production and other ecosystem functions.

We set up the beta diversity experiment in autumn 2019, and did a full-factorial manipulation of alpha diversity, beta diversity and dispersal limitation. A main expectation is that beta diversity can promote biomass production, but only if species can disperse among patches, as it allows species to disperse to, and grow biomass in, the abiotic environments where growing conditions are best for them. 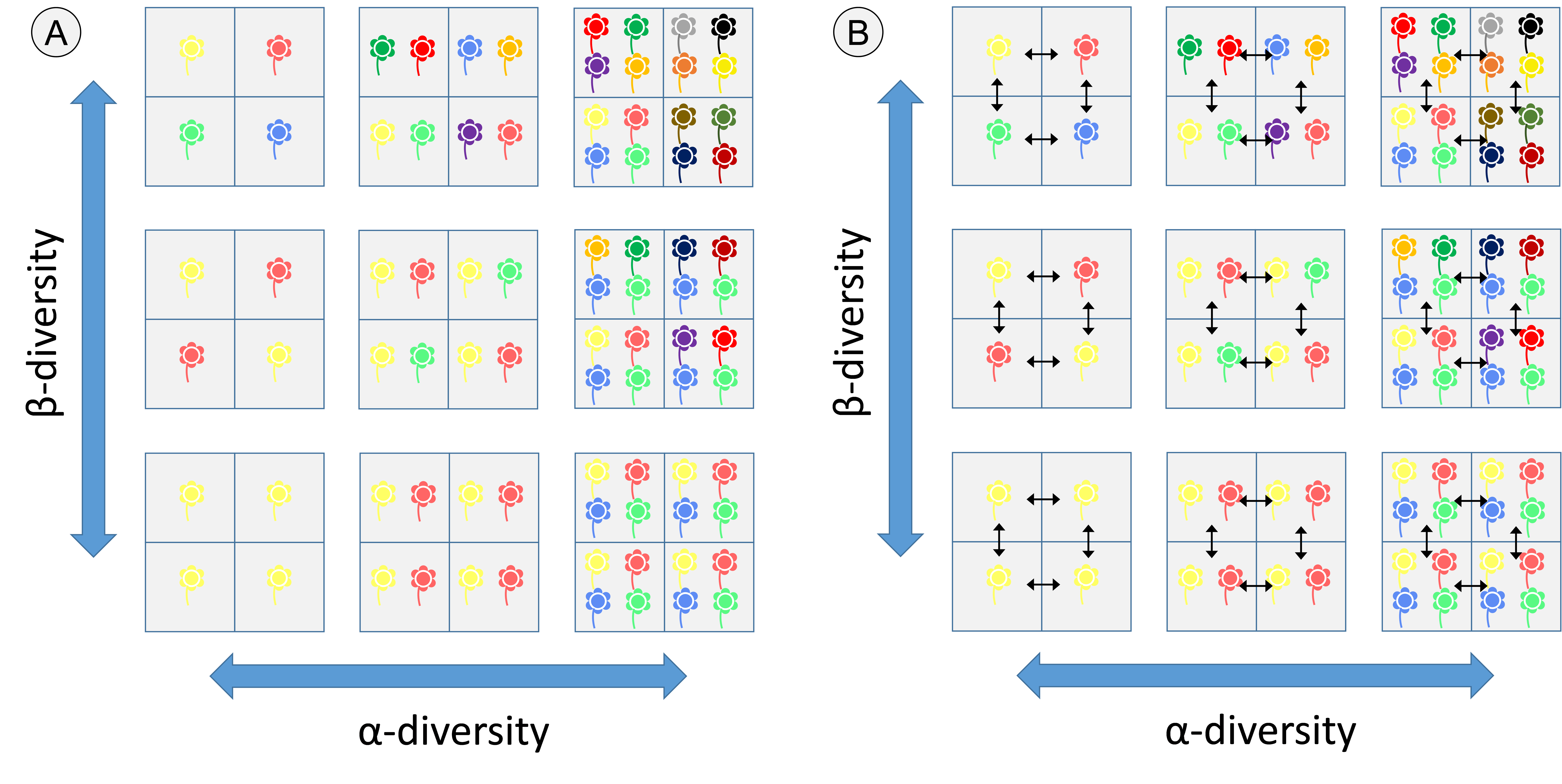 Experimental design of the beta diversity experiment. 3 factors (dispersal, α- and β-diversity) are manipulated. α-diversity (number of species within subplots) varies from 1 to 2 to 4 species along the horizontal axis, β-diversity (dissimilarity in species composition among subplots) increases from 0 (no turnover) to 0.5 to 1 (complete turnover) along the vertical axis, and dispersal is either not allowed (A) or allowed (B) among subplots.

I am also collaborating with the following projects