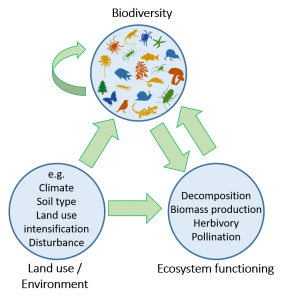 My research focuses primarily on the causes and consequences of biodiversity change, and on how nature can be managed to maximize biodiversity (Fig. 1). Specifically, I am interested into how various global change drivers, including land use, cause changes in both the richness and composition of plant and animal communities. Furthermore, I am also interested in what the consequences of global change drivers are for the ability of ecosystems to provide multiple ecosystem functions (‘ecosystem multifunctionality’), and how relationships between global change drivers and ecosystem functioning are driven by biodiversity, across a range of spatial scales. Recently, I also became increasingly interested in how changes in policy and incentives can affect land use and as a consequence, biodiversity. I am also highly interested in how traits can be used to explain differences among species in their effects on ecosystem functioning. My research involves a range approaches, including experiments, comparative approaches and simulation studies.

What are the drivers of biodiversity change?
The diversity and composition of both plant and animal communities is changing rapidly, and part of my research focuses on which environmental and anthropogenic factors drive this biodiversity change. I am particularly interested in the effects of land-use, including fertilization, mowing and grazing, on biodiversity change. With the EU-funded GrazeLife project, we are studying how various forms of grazing management, including intensive and extensive livestock grazing, pastoralism and rewilding, drive biodiversity change. In addition, using interdisciplinary approaches, we are also investigating what the main motivations of land users are, and how incentives could be changed to promote more biodiversity friendly land use. The goal of this research is to develop both new scientific insights, as well as to develop evidence-based policy recommendations for EU-wide land use. In addition, I am also involved in the Biodiversity Exploratories, to understand how various forms of grassland use, including fertilization, grazing and mowing, drive plant biodiversity and ecosystem functioning, and their reciprocal relationships. We are doing this using a combination of comparative field studies, field- and lab experiments.

What do traits tell us about differences among species?
Traits are measurable properties of organisms, and they are ‘functional’ when they have consequences for the growth, survival, reproduction or other forms of performance of organisms. During my PhD research, I investigated how functional traits can be used to understand the (multitrophic) assembly of plant and animal communities. Currently, I am involved in the sRoot working group which seeks to understand how and why different root traits of plants are related to each other, how they related to aboveground plant traits and to which extent they can be used to predict a plant’ species response to environmental conditions. In addition, using data from the Jena biodiversity experiment, I have investigated to which extent plant traits can be used to predict rates of ecosystem functioning.